How Taxes and the Federal Budget Work

Who Decides the Federal Budget?

And it is a complicated process. Many forces shape the federal budget. Some of them are forces written into law – like the president’s role in drafting the budget – while other forces stem from the realities of our political system.

And while the federal budget may not currently reflect the values of a majority of Americans, the ultimate power over the U.S. government lies with the people. We have a right and responsibility to choose our elected officials by voting, and to hold them accountable for representing our priorities. The first step is to understand what’s going on.

The U.S. Constitution designates the “power of the purse” as a function of Congress.1 That includes the authority to create and collect taxes and to borrow money when needed. The Constitution does not, however, specify how Congress should exercise these powers or how the federal budget process should work. It doesn’t specify a role for the president in managing the nation’s finances, either.

As a result, the budget process has evolved over time. Over the course of the twentieth century, Congress passed key laws that shaped the budgeting process into what it is today, and formed the federal agencies – including the Office of Management and Budget, the Government Accountability Office, and the Congressional Budget Office – that provide oversight and research crucial to creating the budget.2 The process as it’s supposed to work is described here.

Congress creates a new budget for our country every year. This annual congressional budget process is also called the appropriations process.

How Does the Federal Government Create a Budget?

There are five key steps in the federal budget process:

The president sends a budget request to Congress each February for the coming fiscal year, which begins on Oct. 1.5

The Appropriations Committees in both the House and the Senate are responsible for determining the precise levels of budget authority, or allowed spending, for all discretionary programs.8

Step 4: The House and Senate Vote on Appropriations Bills and Reconcile Differences

The full House and Senate then debate and vote on appropriations bills from each of the 12 subcommittees.

Step 5: The President Signs Each Appropriations Bill and the Budget Becomes Law

This chart shows how all of these pieces fit together to make the annual federal budget process. 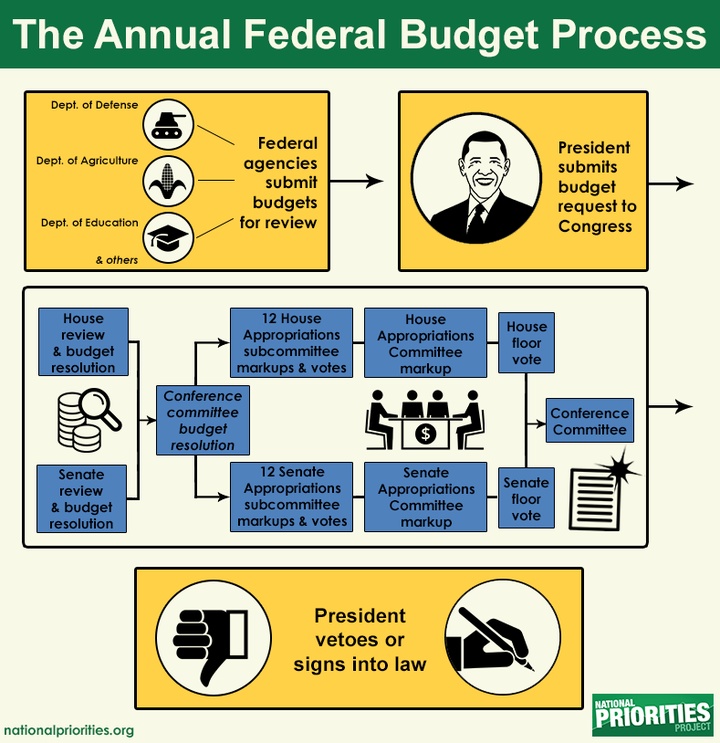 When Congress can’t agree on 12 separate appropriations bills, it will often resort to an omnibus bill – a single funding bill that encompasses all 12 funding areas. The fiscal year 2015 budget was the result of a combined omnibus and continuing resolution enacted by Congress in December of 2014.

From time to time the government has to respond to unanticipated situations for which there is no funding, such as natural disasters. In these cases the government has to allocate additional resources and do so in a timely manner. This type of funding is allocated through legislation known as supplemental appropriations.

It’s Even Messier than It Sounds

So that’s how the budgeting process is supposed to go. And while that sounds pretty complicated, in practice, it’s even more so. Other factors that include the state of the economy, party politics, differing economic philosophies, and the impact of lobbying and campaign contributions also have a considerable impact on the federal budget process.